Use the author–date citation system to cite references in the text in APA Style. In this system, each work used in a paper has two parts: an in-text citation and a corresponding reference list entry. 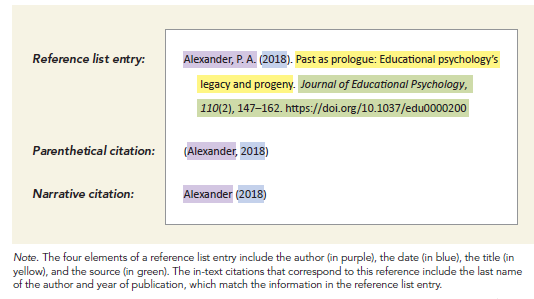 The author–date citation system is covered in Sections 8.10–8.36 of the APA Publication Manual, Seventh Edition

In-text citations may be parenthetical or narrative.

Number of Authors to Include in In-Text Citations

The format of the author element of the in-text citation changes depending on the number of authors and is abbreviated in some cases.

Dates in a Citation

Falsely balanced news coverage can distort the public’s perception of expert consensus on an issue (Koehler, 2016).

If other text appears with the parenthetical citation, use commas around the year.

In rare cases, the author and date might both appear in the narrative. In this case, do not use parentheses.

In 2016, Koehler noted the dangers of falsely balanced news coverage.

Parenthetical and narrative citations are covered in Sections 8.11 of the APA Publication Manual, Seventh Edition

Sometimes multiple works with three or more authors and the same publication year shorten to the same in-text citation form, which creates ambiguity.

To avoid ambiguity, when the in-text citations of multiple works with three or more authors shorten to the same form, write out as many names as needed to distinguish the references, and abbreviate the rest of the names to “et al.” in every citation.

For example, if these two sources were cited in the same paper, three author surnames would be shown in each case before the rest of the surnames are abbreviated to “et al.”:

Because “et al.” is plural (meaning “and others”), it cannot stand for only one name. In cases where only the final author is different, spell out all names in every citation:

Citing multiple works with three or more authors and the same publication year is covered in Section 8.18 of the APA Publication Manual, Seventh Edition

Citing Works With the Same Author and Date

⁠When multiple references have an identical author (or authors) and publication year, include a lowercase letter after the year.

Citing works with the same author and same date is are covered in Sections 8.19 of the APA Publication Manual, Seventh Edition

Citing Authors With the Same Surname

⁠If the first authors of multiple references share the same surname but have different initials, include the first authors’ initials in all in-text citations, even if the year of publication differs. Initials help avoid confusion within the text and help readers locate the correct entry in the reference list.

If the first authors of multiple references share the same surname and the same initials, cite the works in the standard author–date format.

Sometimes people publish under multiple names because of a name change (e.g., transgender authors, authors with a change in marital status). It is seldom relevant to note that two names refer to the same person. When a given name has changed, include initials with in-text citations only when the initials are different.

If multiple authors within a single reference share the same surname, the initials are not needed in the in-text citation; cite the work in the standard author–date format.

Citing authors with the same surname is covered in Sections 8.20 of the APA Publication Manual, Seventh Edition