This page addresses the basics of figure setup, including figure components, principles of figure construction, and placement of figures in a paper. Note that tables and figures have the same overall setup.

View the sample figures to see these guidelines in action. Information is also available on how to use color to create accessible figures. 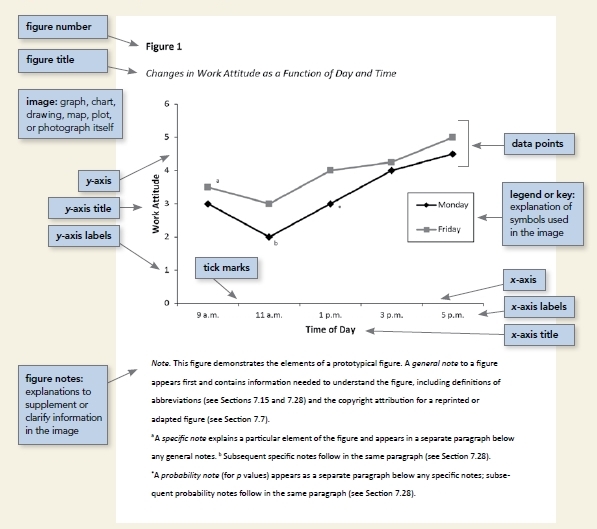 Figures are covered in Sections 7.22 to 7.36 of the APA Publication Manual, Seventh Edition

When creating a figure, ensure you meet the following standards:

Use graphics software to create figures in APA Style papers. For example, use the built-in graphics features of your word-processing program (e.g., Microsoft Word or Excel) or dedicated programs such as Photoshop or Inkscape.

Placement of figures in a paper

There are two options for the placement of figures (and tables) in a paper. The first is to embed figures in the text after each is first mentioned (or “called out”); the second is to place each figure on a separate page after the reference list.

An embedded figure may take up an entire page; if the figure is short, however, text may appear on the same page as the figure. In that case, place the figure at either the top or bottom of the page rather than in the middle. Also add one blank double-spaced line between the figure and any text to improve the visual presentation.

View the sample figures for more information on figures.